Taking Stock in the Garden

You win some you lose some.

I’ve been focussing too much lately on where I am losing (I beat the woodchuck in my veg garden, only to have a bunny from hell move in). I also had a solenoid in the sprinkler break and I realized too late to save some sun-singed plants in that section.  I’ve also been considering writing a ‘bring out your dead’ style post – this past winter was brutal and my list of lost plants is easily twice as many as any year in memory…I could go on with my laments….

But instead, today I’m choosing to focus on the positive and as I looked around the garden — I realize that many of my biggest success were entirely unexpected, accidental, or the result of a hurried and thoughtless decisions. Figures. My favorite part of the garden right now is what I call the finger bed (so-called because it is shaped like an obviously giant finger).  I love grasses of all sorts and set out to create a great mix of them in this bed.  My intention has not turned out so great — I have a lot of grasses that can often all look too similar to be interesting.  But my boring overuse of grasses has been saved with some of my haphazard thoughtless planting choices. Proven winners sent me a couple of Candy Oh! roses a few years ago to try out…and when they arrived this bed was brand new and empty. Lacking a plan and generally needing to fill space, I plopped them in.  I have to admit, I wasn’t enthusiastic about them at the time – back then I was still in my ‘I hate roses’ phase (from which I have mostly recovered).  I look at them now and I can’t imagine how dreadfully boring this garden would be without them.  Oh, and that Hakuro Nishiki Dappled willow was a plant I bought sight unseen through the local conservation plant sale – and I hated them (I had bought three!) when they arrived.  Garish and ugly were the thoughts in my head. Now I think bright and beautiful….just what is needed to break things up, offset the red flowers, and balance out all the dark brown and black buildings and tall pines around here.  What do I know? – I’m just a garden designer. I can however pat myself on the back for one thing (that worked way better than I expected).  Last year these roses were decimated by Japanese beetles.  They turned into ugly skeleton bushes in a matter of a week.  I also had a terrible infestation of grubs and moles.  These are all related of course (moles eat grubs, grubs kill grass and become beetles,  - if no grubs, then no beetles, and no moles).  I bought a huge box of milky spore powder early this spring and spread it accordingly.  It is clearly working.  The squishy mole ridden grass has gone away and you can see there isn’t a Japanese beetle in sight (look at those pretty healthy leaves!).  Score one for the gardener. I noticed another happy accident that I am going to have to help along.  Is it me or do Geranium ‘Rozanne’ look really great with dianthus black adder?  They aren’t really mixed at the moment….but I am really loving the light purple and inky near black so I am going to have to give those dianthus seed heads a good shake around the geranium.  I suspect some silver leaves might really make things sing….We will see how this looks next year….

How about you — got any unexpected or accidental winners?

Disclosure: This post is sponsored by Proven Winners.  I am not an employee of Proven Winners and all opinions are my own. See the other posts in this series.

Ask a Question or Give Feedback about this blog post.
More from our blog: 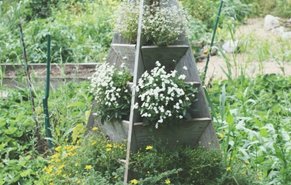 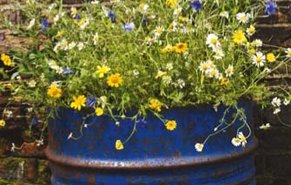 This week I have been pulling together ... 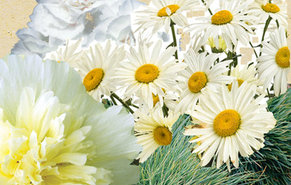 What To Do With The Strawberry Tower?

My strawberries hate my ... 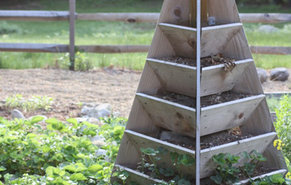 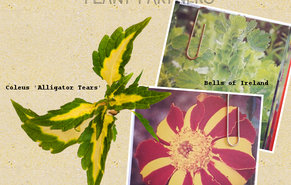 Which Makes the Perfect Purple Edge? ... 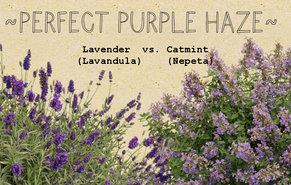